SASKATCHEWAN ISN’T TORONTO: Why the New Proposed Mortgage Stress Test Rules are Bad Policy for Smaller Markets
May 5th, 2021
Often ignoring the fact that real estate is highly local, recent headlines have prompted fears that the Canadian real estate market is overheated. Much of this fear, however, comes from large markets such as Vancouver, Montreal, and Toronto, where the average home price has increased 21.6% annually.

With such rapid price appreciation and concerns over housing affordability, there have been calls for increasing regulation of “the housing market” (again, ignoring the fact that there are several unique housing markets across the country). Canada Mortgage and Housing Corporation (CMHC), for instance, has reportedly been looking at introducing a tax on home equity (though CMHC notes that this is part of an ongoing research study and that it will not making it policy). RBC Senior Economist Robert Hogue has even suggested that the capital gains exemption on principal residences be removed. Ultimately, both seek to reduce prices (and will help to cool demand for housing), helping to improve affordability.[1]

Most significantly, however, the Office of the Superintendent of Financial Institutions (OSFI) has suggested that it will increase its minimum qualifying rate for an uninsured mortgage to 5.25% in June 2021.[2] Because fewer people will be able to qualify for a mortgage under these new regulations, demand for housing will certainly drop, and this will certainly help to moderate the price growth that we’ve seen.

OFSI first announced that changes to mortgage qualification rules would come into effect January 1, 2018. And when these rules were introduced, the SRA estimates that sales in Saskatchewan fell over 7.4% as a result.[3] (At the same time, the changes only brought prices down approximately 1.1%). 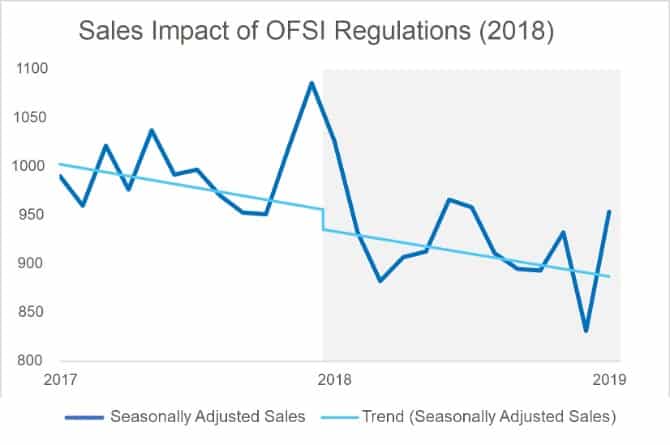 [1] Both measures seek to reduce prices and will help to cool demand for housing in the short-term. And as a result, we should see a temporary moderation in price growth. However, neither of these measures target the actual reason that prices keep rising and so will have little impact on long-term affordability.

[2] While the aim of this move is to help ensure that the banking system remains stable and immune from financial catastrophes, this will likely also curtail long-term demand in the housing market since fewer people are likely to qualify for a mortgage.

[3] Sales across the province had been declining since 2014 (which also contributed to falling prices). With demand already falling, the new regulations may not have had as much impact as they would have had demand in the province been increasing at this time. As anticipated, however, sales spiked in the months right before the new regulations came into effect before falling.

Impact of Changes to OFSI Mortgage Qualification Rules
And while we can’t say for certain just how much of an impact OFSI’s proposed changes will have on demand (or prices), we can expect to see a similar pattern–a spike in sales before the new rules come into effect followed by a fairly significant drop in sales.

While this will certainly achieve the goal of reducing demand (and thus helping to reduce prices), there are a few problems with this policy. First, as suggested by the previous changes, making it harder for people to qualify for mortgages will only minimally constrain price growth which is the intended goal of the policy.

Significantly, such a policy will hurt the economy at a time when real estate continues to be one of the few industries helping to support the economic recovery. If the new regulations have the same impact on demand as before, making it harder for people to qualify for mortgages will cost the Saskatchewan economy more than $280M in direct and spinoff real estate activity. Given that the province’s deficit is already set to increase as the government takes additional steps to help the economy recover from the pandemic, this is an unnecessary action.

A third problem with these proposed changes is that while they can help reduce demand temporarily, they fail to address the fundamental reason that house prices keep going up, and that is the imbalance between supply and demand. Essentially there aren’t enough homes to meet current demand, and as CIBC deputy chief economist Benjamin Tal has noted, home prices are going to keep increasing “…until we fix the supply issue that is really impacting valuation…”. Although Tal was speaking about large markets in particular (and again, it’s the price increases in larger markets driving broad policy changes that will disproportionately affect smaller markets), markets in Saskatchewan also face supply issues.

Finally, OFSI’s new rules may not even be necessary. We’re already seeing populations in large markets like Toronto, Montreal, and Vancouver shrink (in part due to COVID) as people move to markets that are more affordable. As a result of the subsequent drop in demand due to these population shifts–and as demand comes into better alignment with supply–prices should moderate or even fall.

Although housing affordability is an important issue and policy should be implemented to help keep homes affordable, the major issue confronting affordability today is insufficient housing supply, and this problem will only get worse as Canada’s population continues to increase. As a result, targeting demand is only a temporary (and ultimately ineffective) solution to keep housing prices down, and efforts need to be made to increase housing supply.

Furthermore, policy measures aimed at addressing issues in a few cities shouldn’t be applied across-the-board. What may work to moderate price appreciation in the Greater Toronto Area (with a population of 6.4 million), for instance, could have serious adverse consequences in a province like Saskatchewan (with a population of 1.2 million). We need to remember that each market is different and has its own dynamics that a one-size-fits-all policy simply can’t address effectively.

Chris Gbekorbu( Saskatchewan REALTORS® Association – Economic Analyst )
Chris joins the SRA from his previous post as an Adjunct Professor with the University of Regina, the First Nations University of Canada, and Carleton Trail Regional College, where he taught economics, marketing and critical reading and writing courses. He also brings a wealth of experience from his time as a Business Writer and Marketing Analyst with Information Services Corporation (ISC) where he helped interpret technical information into business procedures. Chris holds multiple degrees including a BA in English, a BA Honours in Psychology, an MA in English, a BSc in Economics and an MBA, all from the University of Regina.

As SRA’s Economist, Chris has contributed solid, impactful data to the membership, media and public, which has helped shape a positive narrative about Saskatchewan’s real estate industry during COVID-19. He has also been conducting research in several areas to determine the impact of the pandemic and ongoing economic uncertainty on Saskatchewan’s real estate industry.

🏡💰 The equity in your home is a topic worth discussing and I'm here for it.👇 Share your questions or comments below or contact me directly!📱 Message to chat📞 306-551-7666💻 www.jasoncossette.ca#homeequity #reginarealestate #jasoncossette #reginarealtor #localregina #reginahomesforsale ... See MoreSee Less

💰 When buying a home, it is crucial to understand what you can afford.🏡 Make sure the property you buy is one that you will be able to maintain and grow with over the years ahead.👇 I welcome your comments and questions below. How can I help you make your next move?📱 Message to chat📞 306-551-7666💻 www.jasoncossette.ca#homebuyers #reginahomes #reginarealestate #jasoncossette #reginarealtor #suttongroup #marketexpert #localregina #cossette ... See MoreSee Less

Are you wondering what 2022 has in store for inflation and interest rates?Check out this article for the most recent projections. ... See MoreSee Less

What 2022 Has in Store for Inflation and Interest Rates

Since the onset of the COVID-19 pandemic, Canadians have been taking advantage of some of the lowest mortgage interest rates in history. On March 4, 2020, the Bank of Canada (BoC) made a 50 basis poin...
View on Facebook
· Share